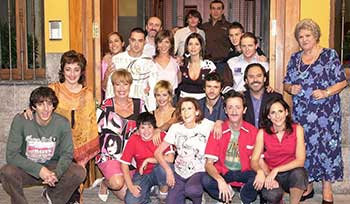 And this is only the cast from the third season.
Advertisement:

Aquí no hay quien viva (roughly, "No one can live in peace here") is a Spanish dramedy/Sitcom set in an apartment building, calle Desengaño 21 ("Disillusionment Street"), in Madrid. The series focuses on the entire community: three apartment floors, with two apartments each. Plus, the doorkeeper's lodge in the ground floor, the business locale (most of the time a video rental club) and the attic. As the cast's lives crash with each other, Hilarity Ensues.

The show ran for five seasons, from 2003 to 2006, totalling at 90 episodes (though the third season was so long, the DVD release split it in two and some consider the show to have six seasons). It became an instant and huge cultural phenomenon in Spain. It won numerous awards in its home country and was the third most watched show in Spain during the early years of the Turn of the Millennium. The popularity warranted eleven different remakes in other countries.

Eventually the series ended up becoming a victim of some serious Executive Meddling that ended up causing Troubled Production, the departure of several actors over the years and ultimately its cancellation, although the screenwriters managed to write a definitive conclusion to the characters. A year later, the cast and crew teamed up again on a different network to make a Spiritual Successor: La que se avecina (a Pun that means "What's coming", albeit the word "avecina" is almost identical to "vecina", which means "female neighbor").