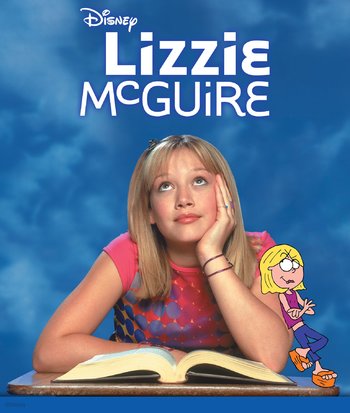 "I had bitmoji before anyone else."
—Hilary Duff via Instagram

Also, Lizzie has an animated conscience inside her head narrating her every move.

Lizzie McGuire, created by Terri Minsky, is one of Disney Channel's biggest hits, airing for a full 65 episodes from January 2001 to February 2004, and playing a role in the transformation of Hilary Duff into an Idol Singer. It is commonly misblamed for being the first of Disney's tween sitcoms geared toward a more suburban audience. That title belongs to That's So Raven, and even then, it wasn't the last show to be produced by It's a Laugh Productions (the last Disney Channel show produced outside of It's a Laugh was Phil of the Future). It also has the honor of being the first live-action Disney Channel series to gain a theatrical movie, a feat followed by Hannah Montana.

In August 2019, it was announced that a revival was in the works for Disney+, with Duff reprising the titular role. The new series would follow Lizzie as a thirty year-old living in New York City, with her animated asides remaining part of the show. It was going to begin streaming in 2020, but Creative Differences between Terri Minsky and Disney+ executives resulted in Minsky stepping down as show runner before production could finish. Duff has been vocal that she and Minsky wanted to tell stories about an adult Lizzie and all that entailed (with many articles reporting that the pilot would feature a sexual infidelity) but Disney+ insisted on a more family-friendly presentation, and fired Minsky when she refused to agree. This sent production into limbo, with Duff refusing to go along with Disney+ and hoping for a soft-landing on a more adult-friendly platform like Hulu, as had happened with Love, Victor. Whatever progress might have been made was halted altogether by the COVID-19 pandemic, and Duff announced the cancellation of the reboot series on her Instagram on December 16, 2020.

Excessive arguing between Lizzie and Matt causes them to mysteriously swap bodies.

Excessive arguing between Lizzie and Matt causes them to mysteriously swap bodies.