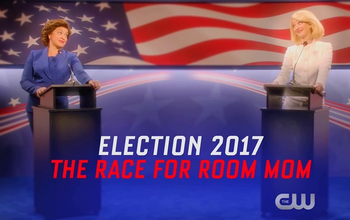 "Ugh, why is everyone so obsessed with voting today?"
— Mateo, Superstore, "Election Day"
Advertisement:

An election day episode is one in which an election is the focus of the episode. In many countries around the world, people have the opportunity to influence those responsible for governing them via the ballot box. Given that this is a part of life, it thus shows up in works of fiction occasionally.

Election day episodes usually focus on one, two, or more main and/or recurring characters pursuing a bid for some elective office, though sometimes the focus can be reversed to focus on potential voters dilemma as to who they believe to be most qualified for office.

Election day episodes will sometimes end in a Dark Horse Victory if the Victor is a write-in candidate or in the case of an Underdog Victory.

Compare and Contrast with All Elections Are Serious Business, with which this trope can possibly overlap, particularly in more humorous takes.