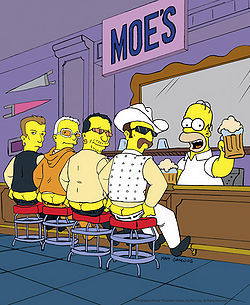 Homer's jerkass antics gets the family's garbage collection cut off, and Marge writes an apology to the garbagemen on Homer's behalf. Incensed that Marge would do something like this, Homer takes on sanitation commissioner Ray Patterson (voiced by comedian, actor, and one of Saturday Night Live's most frequent and memorable hosts, Steve Martin) in an upcoming election and wins his seat with a campaign that promises more than it can deliver.