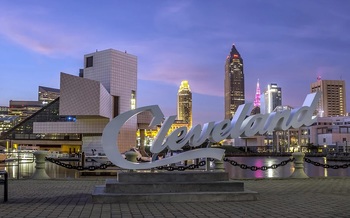 "We're not Detroit!"
"Every country has that one city they make fun of. In Russia, we used to make fun of Cleveland."
— Yakov Smirnoff
Advertisement:

Known in some circles as "The Mistake By The Lake" (i.e., Erie), "The Land," "The 216," or "Cleland," Cleveland is one of the three "Big C's" of Ohio, along with Columbus and Cincinnati. Located on the state's northeastern coast, Cleveland was once one of the industrial boom towns that surrounded the Great Lakes in the late 19th and early 20th century and (briefly) was the fifth-largest city in the United States. Those days are long, long gone, and Cleveland is now often considered a Wretched Hive and a Place Worse Than Death, and the source of a steaming joke

that's been going for years. Recent polls and news articles only reinforce this image, as it was once rated the most miserable city in America

. It was also the original Trope Namer for Aliens In Cleveland, as the city is considered by many the image of mundane mediocrity (at best).

Possibly the biggest reason why this goes unchallenged is that all but the most anal-retentive of locals have a sense of humor about it — they'll tell you themselves how Cleveland is America's down-pat worst. With brutal winters, massive urban decay, a river that was once so polluted that it caught fire thirteen times

and named a local beer after that fact

, several political scandals leading to multiple FBI raids, and the fact that road construction is never finished (also a staple of Ohio in general), most residents have no illusions of being in paradise, and often speak with Gallows Humor. Some choose to stay, however, as the city has a low cost of living, a growing healthcare industry (the world-renowned Cleveland Clinic and University Hospitals), and decent nightlife. It can even be called a mini-Chicago, due to its patchwork of ethnic neighborhoods, Midwest atmosphere, public rail that's both elevated and underground (well, it runs in its own ditch rather than under the street, but same diff), division by a major river (east and west in this case, with people on either side almost never going further than downtown), and massive crime rates. And then there's Balloonfest '86. And the Torso Killer...

On some more positive notes, the term "Rock & Roll" was coined in Cleveland by local DJ Alan Freed, and the city has a proud musical heritage and is home to both the Rock & Roll Hall of Fame and the Cleveland Orchestra, the youngest of America's "Big Five" symphonies (the others are New York, Boston, Chicago, and Philadelphia). Cleveland also houses the Polka Hall of Fame

is a sub-genre of music named after the Polka Dorks of the city due mostly in part to the success of Frankie Yankovic but also to a large number of people of German and Eastern European (especially Polish) descent in Cleveland. Jazz musicians, including scat jazz, also have been and continue to be popular. The Playhouse Square in downtown is the second-largest theatre complex in the United States, behind New York City's Lincoln Center. The city is also sometimes used as a stand-in for NYC or Chicago in film, due to lower filming costs, since it has similar architecturenote Many a local has squeed upon seeing the Trust Company Rotunda in Spider-Man 3. It possesses a surprising number of truly beautiful churches, more museums than a city thrice its size generally has, and two of the best library systems in the country. Cleveland's the home of Case Western Reserve University, one of the more bizarrely named colleges in the countrynote The Case Institute of Technology and Western Reserve University used to be two separate institutions until 1967. "Western Reserve" itself refers to an old name for northeast Ohio, the Connecticut Western Reserve, claimed by the state of Connecticut for its veterans to settle in following the American Revolution until the state agreed to give it up to the newly-formed state of Ohio., and Cleveland State University. An hour southeast is Kent State University, a Berzerkeley known for an infamous massacre in 1970.

Cleveland's professional sports teams generally go through extended periods of crappy performance with losing streaks of several games on end, interrupted with periods where they steamroll through everyone in their waynote We win a title about every century!. Its football team, the Browns

note Before you ask what a "Brown" is, the team was named after its first owner, Paul Brown, former Ohio State University coach and a highly respected figure in Ohio athletics. It wasn't even his idea and he was against it at first, but later went along with it. For an animal mascot, dogs have long been popular due to the city's first pro football team, the Bulldogs., who used to be one of the most dominant teams in the NFL in the '50s and '60s and has had a rivalry with Pittsburgh for decades. Never, ever say anything nice about the Baltimore Ravens to a Browns fan; the original Browns franchise moved to Baltimore through some shady dealing on owner Art Modell's part, then quickly went on to achieve Super Bowl success that Clevelanders believe should be theirs. The city fought to hold on to the Browns' name and history, and the "new" Browns debuted in 1999. They have not fared nearly as well, sitting at the bottom of the league's standing almost every year and taking over two decades to win a playoff game, which they finally did in 2021 against Pittsburgh.

Cleveland's baseball and basketball teams are respectively the Guardians (formerly the Indians) and the Cavaliers. The Guardians have gone over sixty years without a World Series title, longer than any other Major League Baseball team that hasn't been cursed by a goat-owning bartender... at least until 2016, when they inherited the title of longest drought by losing to the Cubs! Meanwhile, the Cavs (founded in 1970) never even made it to the NBA Finals until 2007. When it looked like the latter were poised to finally win a championship in the late 2000s, they ended up losing star player LeBron James (from nearby Akron, some 40 miles [64 kilometers] to the south) to the Miami Heat in 2010, with whom he won two titles... before he chose to return to the Cavs in 2014, leading them to their very first NBA title in 2016 (in which they became the first team to ever rally from a 3–1 hole in the Finals) and ending a 52-year championship drought which had affected all of Cleveland's pro sports teams ever since the Browns last won a title in 1964 (two years before the Super Bowl even existed, and also before LeBron's mother was born). The Cavs eventually lost LeBron a second time in 2018, this time to the Los Angeles Lakers. In other sports, hockey is only represented through the second-tier American Hockey League (the NHL only had a Cleveland team for two years), where ten Cleveland teams won the Calder Cup, most recently the Lake Erie Monsters (since renamed the Cleveland Monsters) in 2016—just 8 days before the Cavs' title;note The Monsters, farm team of the NHL's Columbus Blue Jackets, are owned by the same guy as the Cavaliers and the teams share an arena! and while Cleveland won some indoor soccer tournaments, the town's only team

is in the fourth tier (Major League Soccer has two teams in Ohio, but they're in Columbus and Cincinnati).

The city was named for surveyor Moses Cleaveland (the first 'A' was reportedly dropped so the name would fit on a newspaper masthead) and has no connection to the English county of Cleveland, or the 22nd and 24th President of the United States (who was only distantly related to Moses Cleaveland).

Has been the subject of some rather infamous but hilarious

Celebrities from Cleveland and the surrounding area:

It could be worse, though: at least we're not Detroit!