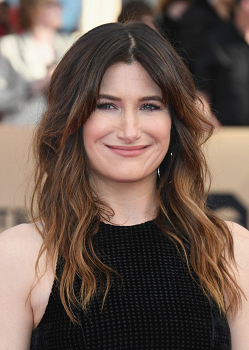 "Lovely to finally meet you, dear."
♫ Who's been messing up everything? It's been Kathryn Hahn all along! ♫
Advertisement:

Kathryn Hahn (born July 23, 1973 in Westchester, Illinois) is an American actress and comedian.

Born in Illinois and raised in Ohio,note Hahn started her career as a child with an appearance on the series Hickory Hideout; a 1981-91 Edutainment Show produced locally by Cleveland NBC station WKYC-TV 3; then an owned-and-operated station (the station was sold by NBC in 1990 but remains an affiliate); with the series airing on the other NBC O&O stations by the end of its run. she broke out as Lily Lebowski on Crossing Jordan before appearing in several films such as How to Lose a Guy in 10 Days and Anchorman: The Legend of Ron Burgundy. On the television side, she's known for roles in Parks and Recreation and Transparent, and has a featured role in the Marvel Cinematic Universe series WandaVision. She's a common Frat Pack collaborator.

Hahn is an alumna of both Northwestern and Yale, and is married to her Crossing Jordan castmate Ethan Sandler.