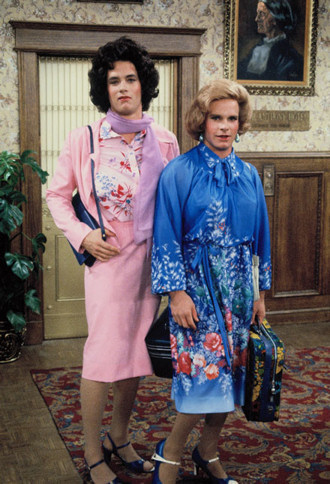 Tom Hanks and Peter Scolari as "Buffy" and "Hildy".
Henry: Our friend Amy said there was a great apartment in her building...
Kip: Dirt cheap! But it's a hotel for women. Okay, we made one adjustment.
Henry: Now these other ladies know us as Buffy and Hildegarde.
Kip: But they also know us as Kip and Henry, Buffy and Hildy's brothers. I am crazy about the blonde.
Henry: This experience is gonna make a great book.
Kip: See? It's all perfectly normal!
— Opening Narration
Advertisement:

A Sitcom starring Tom Hanks and Peter Scolari that ran on ABC from 1980 to 1982.

The series premise has struggling NYC ad men Kip and Henry trying to move into the Susan B. Anthony Hotel due to its dirt-cheap rent (after their original apartment was demolished... while they were living in it). But since it's a women-only hotel, they disguise themselves as "Buffy and Hildegarde," supposedly Kip and Henry's sisters.

As the show went on, this Disguised in Drag premise moved increasingly into the background. In the second season, the entire recurring cast knows Kip and Henry's secret (though they continue to live in the hotel and pose as women for the other residents). There was also a shift to focus more on the Work Com aspects of Kip and Henry in the advertising business, and in general on Hanks and Scolari's chemistry as a (conventionally-dressed) comedic duo.

Hanks and Scolari were the only male members of the regular cast, which included Wendie Jo Sperber as friend and Secret-Keeper Amy, Donna Dixon as Kip's love interest Sonny, Telma Hopkins as hotel manager Isabelle, and Holland Taylor as Kip and Henry's overbearing boss Ruth.