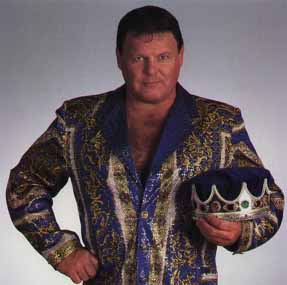 I'm breaking through, I'm bending spoons, I'm keeping flowers in full bloom, I'm looking for answers from the great beyond.
"It takes a king to know a king!"
Advertisement:

Starting in 1970, Lawler wrestled for numerous wrestling promotions including the AWA and various promotions based in the Memphis area working as both a Face and Heel. He's also managed a few of them, such as Continental Wrestling Association/Pro Wrestling USA (Where he had a famous feud with Andy Kaufman) and the United States Wrestling Association.

, a title he rosed and held 51 times. Besides this Lawler is a former 3x CWA International Heavyweight Champion

, having unified both last titles by defeating Kerry Von Erich at AWA SuperClash III in December 1988.

Lawler would eventually join the World Wrestling Federation in 1992, originally as a heel color commentator and part-time wrestler. Lawler was noted for his humorous digs at popular wrestlers and, once the Attitude Era was in full swing, his... um... appreciation of certain aspects of the female anatomy, which he gleefully called "Puppies!" at every opportunity.

In spite of the WWE's often 300 day a year schedule, Lawler has still found time to wrestle for independent promotions from time to time and even some major ones outside of the continental United States every once and while.

He was inducted into the WWE Hall of Fame in 2007.