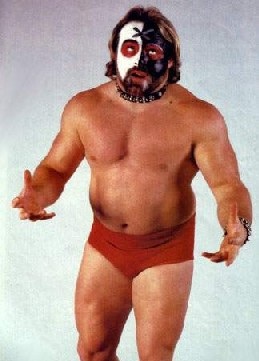 "I have hung from the Tree of Woe..."
Advertisement:

Kevin Francis Sullivan (born October 26, 1949) is a retired body builder turned Professional Wrestler and booker from Boston, Massachusetts best known for his work in WCW during the 1980s and 1990s. He has wrestled for the WWWF, various National Wrestling Alliance territories, WCW, ECW, W*ING, FMW, Juggalo Championship Wrestling, SMW, New Japan Pro-Wrestling and many independent promotions. He made his PPV debut in the Tower of Doom match teaming with Mike Rotunda, Ivan Koloff, Al Perez and the Russian Assassin in a losing effort against The Road Warriors, Jimmy and Ronnie Garvin and "Dr. Death" Steve Williams at NWA The Great American Bash 88. Among his in-ring achievements, he held the NWA ECW Tag Team Titles

twice with the Tazmaniac and the WCW World Tag Team Titles

As usual, the basics about his career can be found at That Other Wiki

Not to be confused with the Comic book character villain Taskmaster, or the completely unrelated task-setting UK comedy series Taskmaster. Or the unrelated, but very similarly named, video game Taskmaker

Works associated with Kevin Sullivan that have pages on TV Tropes:

"These tropes have hung from the Tree of Woe and seen the lady with the Third Eye":