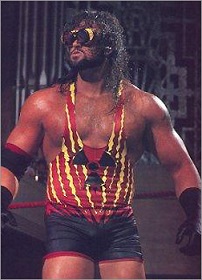 "The Creation of Devastation"
Advertisement:

Bryan Emmett Clark (born March 14, 1964) is a retired American Professional Wrestler from Harrisburg, PA best known for his work in WWE from 1993-1995 as Adam Bomb and in WCW from 1997-2001 either as Wrath during the Mortal Kombat-inspired Blood Runs Cold storyline or under his own name as a member of the Tag Team Kronik with Brian Adams. He started his career in 1990 in the dying days of the AWA as The Nightstalker, and also competed for WCW, SMW and the USWA in Memphis under that name. While competing as the Nightstalker, he made his PPV debut in the "Lethal Lottery" tournament at WCW Starrcade 91 teamed with Rick Steiner in a losing effort against Big Van Vader and Mr. Hughes. While Glacier was based on Sub-Zero and Mortis was a combination of Scorpion and Reptile, Wrath bore similarities to Shao Khan. He also competed for All Japan Pro Wrestling, and finished his career there in 2003. He is a 1x SMW "Beat the Champ" Television Champion

as the Nightstalker and a 2x WCW World Tag Team Champion

as a member of Kronik.