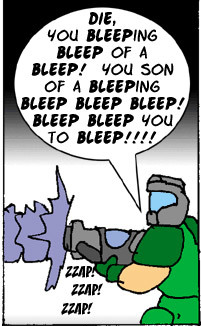 "I'm a black Scottish cyclops! They got more f[bleeeeeeeeeeeeeeeep] than they got the likes of me!" Explanation The censored line was "feckin' sea monsters in the Great Loch Ness"
— The Demoman, Team Fortress 2
Advertisement:

This is when a character launches into a profane tirade for several seconds, which is bleeped out for comedic effect. It's sort of the intersection between The Aristocrats and a Noodle Incident: the humor comes from how incredibly long-winded and offensive the dialog was, but we're left with only other characters' reactions to inform us about what was actually said. Sometimes intercut with odd words that aren't rude in themselves, but make one wonder in what possible context they would make sense. Likewise, if it goes on for especially long with no unobjectionable words mixed in, you have to wonder how it's possible to construct a coherent and relevant statement out of pure swearing.

If the actors are visibly speaking their lines with just the sound bleeped out, this can be a sort of Bilingual Bonus for anyone who can lip-read.

A Sub-Trope of Censored for Comedy and Cluster F-Bomb. Often invokes Nothing Is Funnier, leaving the listener to wonder what is being said. Compare Lost in Transmission. For the visual version, see Symbol Swearing. A character for whom this is characteristic behavior may be a Sir Swears-a-Lot.

Holt goes off at O'Sullivan

Holt gives O'Sullivan one heck of a tirade.

Holt goes off at O'Sullivan

Holt gives O'Sullivan one heck of a tirade.