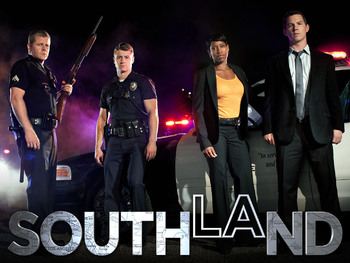 "You're a cop because you don't know how to not be one."
"A day like today? With some interesting capers, and a few good arrests? That's good. But every once in a while, you get to take a bad guy off the streets for good. And that, my friend, is God's work."
— John Cooper, "Unknown Trouble"
Advertisement:

It's pretty much LAPD Galactica.

Whereas other cop shows on TV tend to be almost like a stylish video game, Southland prides itself on being dark and gritty. Several police officers have claimed that it's the most realistic cop show on TV.