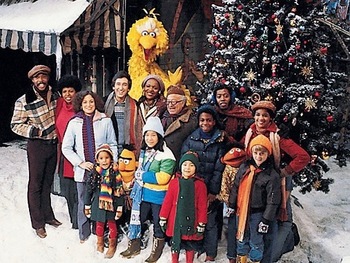 "Christmas Day is almost here.
When it's over, then I cheer!
I'm glad it's only once a year.
I hate Christmas!"
— Oscar the Grouch, "I Hate Christmas"
Advertisement:

Christmas Eve on Sesame Street is a Sesame Street Christmas Special that first aired on PBS in 1978 and was consistently rerun throughout The '80s and around early parts of The '90s.

There are three main plots during its one-hour run time:

As of summer 2021, you can watch it on YouTube here

Compare A Special Sesame Street Christmas, which was filmed at the same time and aired on CBS that same year note yes, the same year and network as The Star Wars Holiday Special - and it shows, but did not feature many Muppets outside of Carroll Spinney's, likely due to the other puppeteers being busy at the time. Unlike Christmas Eve, which has been continuously in release since the 80's, Special did not see a DVD release until 2012.