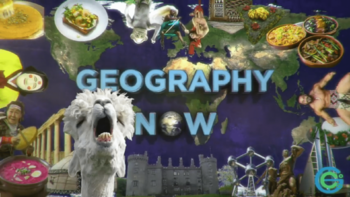 is an Edutainment show hosted by American Youtuber Paul Barbato (AKA "Barby") that premiered in October 2014. The episodes cover informational profiles on countries in alphabetical order, beginning with those largely or fully recognized starting with Afghanistan and moving through Zimbabwe; he intends then to cover those countries with more limited recognition and those which aren't really independent but have their own identity.

Each episode is separated into four segments:

Initially, episodes began with a Flag Dissection segment, where the flag and other symbols of the country like the coat of arms are explained with each part, colour, shape and piece broken down in terms of meaning and significance. Starting with Cuba (May 18, 2016), this segment was spun off into separate videos called "Flag Fridays"; beginning with the Germany episode (February 8, 2017) Paul started to include corrections to the main episode for the country in this segment; starting with Ghana (one week later) Paul expanded Flag Fridays to Fan Fridays where he opens packages that fans have sent in on camera.

Paul, being a rather jolly guy, sometimes adds pop culture references (specifically those referencing Bob Saget) and puns. Sometimes, he usually gets punched or slapped after saying a pun, in addition to regretting bad puns and jokes that might or might not offend certain groups.

When the series first began, there was no set schedule as Paul basically produced the episodes by himself - the wait time between videos sometimes went as long as a month. When Paul signed with production company Studio 71 starting with Cuba (May 18, 2016), episodes began to be uploaded both more frequently and more consistently (this was also when Flag Dissection was spun off into Flag Fridays).

Watch the episodes including the latest one here.