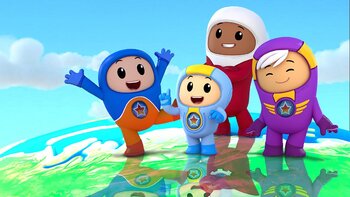 From left to right: Kyan, Foz, Lars and Xuli
Go Jetters is a British animated children's series which airs on The BBC's preschool channel, CBeebies, and premiered in 2015.
Advertisement:

The Go Jetters are a team consisting of four members, Xuli, Kyan, Lars, and Foz, and their leader, an anthropomorphic disco-grooving unicorn named Ubercorn. In each episode, the Go Jetters travel via their hi-tech jet, the Jet Pad, to a new landmark somewhere in the world, with Ubercorn providing three "funky facts" about said landmark along the way. When they reach the landmark, the Go Jetters notice it's being "glitched" (messed with somehow) by Grandmaster Glitch, the show's villain, and must stop him from glitching the landmark.

As of 2018, this show now airs in the United States on Universal Kids.