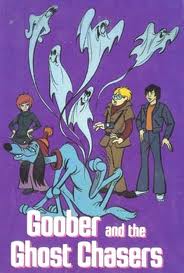 Remember that classic Saturday Morning Cartoon series produced by Hanna-Barbera in The '70s? The one about a group of young people and their cowardly dog solving supernatural mysteries?

Well, of course! Who could forget Goober and the Ghost Chasers?

This series aired for one season (1973) on ABC. Goober, voiced by Paul Winchell, is a dog who becomes invisible when he is scared. His human companions are Ted and Tina, reporters for Ghost Chaser magazine, and Gillie, their reckless photographer.

Though Hanna-Barbera produced the series, the actual animation was farmed out to Eric Porter Studios in Australia. Wilt Chamberlain and Michael Gray were guests in one episode each, and the kids from The Partridge Family appeared in several others.

Goober and the Ghost Chasers provides examples of: