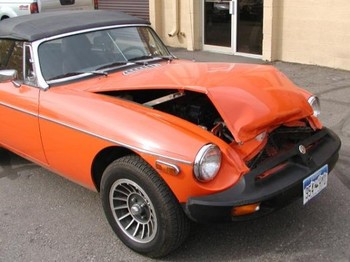 'Tis but a scratch.
Cameron: We're not leaving the car here.
Ferris: Why not?
Cameron: Because we're not. I want the car back home where it belongs. C'mon, let's go.
Sloane: What could happen to it? It's in a garage.
Cameron: It could get wrecked, stolen, scratched, breathed on wrong... a pigeon could shit on it! Who knows?
— Ferris Bueller's Day Off
Advertisement:

Somebody has a car. Maybe they own it. Maybe they've just bought it, probably blowing a fortune on it. Maybe it was "borrowed" from their parent. Maybe it belonged to their employer. Maybe it's been surreptitiously stolen and needs to be transported somewhere in one piece. Maybe they are a car. In any case, there is one important rule to remember: the rarer the car is, the more expensive and exotic and classic it is, and especially the more a character fawns over it as though it is one of the most important things in the world to them, the less likely it is to make it through the movie or TV episode in one piece, much less intact. In fact, it's not terribly uncommon for the car to get utterly demolished during the course of the story, either through sheer bad luck, Wacky Fratboy Hijinx, or through the mistake of lending it to (or having it stolen by) someone who Drives Like Crazy.

Compare Broken Treasure, which this trope can turn into if the car is demolished. When this happens with what you're wearing, you've got yourself some Doomed New Clothes. When the car does not belong to one of the main characters, it's The Precious, Precious Car. Closely related to Action Insurance Gag.

See also Captain Crash and Chronically Crashed Car. Contrast The Alleged Car, a vehicle whose defining quality is being terrible/hated instead of pretty/loved. Not to be confused with watching the paint dry.