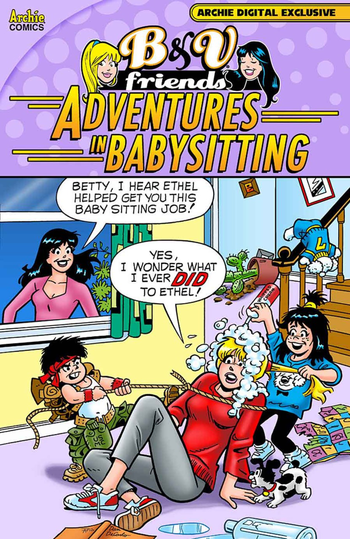 Essentially, this is an episode where a character is forced to babysit a small child or a baby, usually a One-Shot Character. The character that is doing the babysitting may either wind up being a Babysitter from Hell or a Badly Battered Babysitter. Sometimes, the child being babysat may be a Bratty Half-Pint, a Babysitter's Nightmare, or an Enfant Terrible (Eggs are their own trope).

Also, characters having to babysit something else is also pretty common such as a pet or older person (who is always senile). Even objects may apply in some cases (say a sensitive experiment). Anything that requires a lot of attention could fill this role.

Compare Parents for a Day, which appears to be about people being forced into taking care of a baby because of circumstances.

Pinkie babysits a toddler named Lily Pad while Rarity is away.

Pinkie babysits a toddler named Lily Pad while Rarity is away.