Western Animation / Adventures from the Book of Virtues 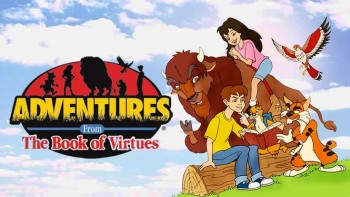 Adventures from the Book of Virtues

is an American TV series that ran from September 2, 1996 to November 2000 on PBS. Based on the bestselling morality book The Book of Virtues by William J. Bennett (who also conceived this series), which was an anthology of fables, legends, historical speeches, and literary excerpts, it follows the adventures of 11-year-old Zach Nichols and 10-year-old Annie Redfeather as they run into typical ethical issues facing normal kids... and their Talking Animal friends at Plato's Peak are there to help them solve their problems with stories from The Book of Virtues.

The inhabitants of Plato's Peak are:

This is the first television series from PorchLight Entertainment, as well as the first prime time animated series for PBS. It is dedicated to teaching life lessons to kids, such as of courage, faith, honesty, loyalty, compassion, gratitude, responsibility, perseverance, self-discipline, and friendship. For a TV series, the animation uses quite an advanced movie quality, giving most of the designs a Disneyesque art style.

Has episodes borrowing plots from Aesop's Fables, The Bible, The Odyssey, etc.

Check out the Characters page and the Recap page.

Adventures from the Book of Virtues provides examples of:

Example of:
Our Minotaurs Are Different