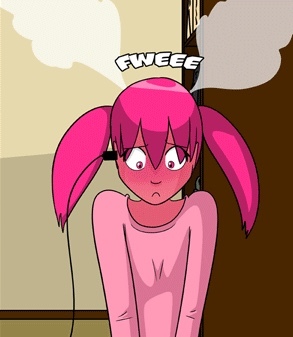 Embarrassed or angry, a cartoon character can go beyond a red face. The deep redness wells up from the neck (teakettle or steam locomotive whistle sound effect here is useful) and culminates in a puff of steam erupting from both ears, the top of the head, or an indeterminate point on the face. The visual effect is similar to an old thermometer rising so high, it blows its top.

The Shrinking Violet is prone to this when in the presence of her crush.

Resembles, but should not be confused with, some manifestations of the Fire-Breathing Diner. Compare Burning with Anger.

Aang gives Joo Dee a piece of his mind.

Aang gives Joo Dee a piece of his mind.