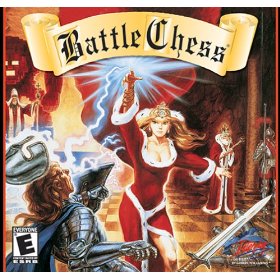 Battle Chess is a series of Chess programs for various PC and console platforms, made back in the late 1980s and early 1990s.

In most respects, it is an ordinary chess program, not even as smart as most PC chess programs of the time. But it is different in one way: The chess pieces are all animated, and every time a piece was moved, you can see an animation. Every time there is a capture, the capturing piece fights a little battle with the captured piece on the board. Since the rules of chess are still in effect, the result of these battles is always a Foregone Conclusion, but the battles are fun to watch, especially on early plays (watching the same animation for the millionth time, however...)

In other words, it's basically a chess game that plays like Holochess or Wizard's Chess. American versions of the game did include gorier battles.

It had sequels: Battle Chess 4000, which is normal chess but with sci-fi characters used as chess pieces, and Battle Chess II: Chinese Chess, based on the Chinese Chess board game. A remake, Battle Chess: Game of Kings was released on Steam in 2015.