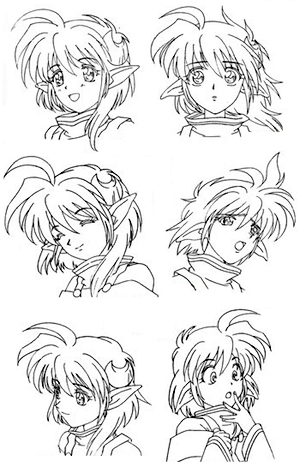 Homer: Can I still talk with my hands?
Michael (Fat Tony's son): No.
Homer: What about my ears?
Michael: [shakes head]
Homer: [ears droop] Hrmm.
— The Simpsons

Exactly What It Says on the Tin: A character's ears are used to express his or her emotions.

An animation convention, similar to Cartoony Eyes or Disembodied Eyebrows.

Unlike its cousin tropes, Expressive Hair (in most cases) and Expressive Mask, this trope actually leans toward being realistic because this is one way many animals in Real Life communicate their feelings. This obviously doesn't apply to human ears, though, so it's guaranteed all of the characters who use this trope are Not Quite Human. In many animated series, characters that have ears on top of their heads will often sport hats or helmets that allow them to stick through (barring Fridge Logic of not being able to hear otherwise). This trope is probably part of the reason why.