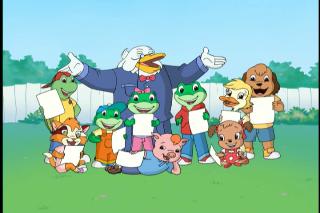 Most of them are gone...
Advertisement:

This page contains tropes that applies to the DVD releases. For the toys, see Franchise.Leap Frog.

This was followed by a two year hiatus and then A Tad of Christmas Cheer in 2007. Then the series went into another two year hiatus before the next video. During this hiatus, the three main characters (and Edison) were completely redesigned and many of the supporting were Brother Chucked or Put on the Bus.

In 2012, it appears that Leapfrog had gotten tired of Leap, Lily and Tad and decided to focus on Scout and his friends instead (not surprising, as at that time, Scout and Violet were Leapfrog's cash cow and toys from the company of that period primarily featured the two puppies). The result was the first two Scout and Friends video, Phonics Farm and Numberland, following a new continuity. This was followed by Adventures in Shapeville Park and The Magnificent Museum of Opposite Words in 2013.

Leapfrog has since proceeded to put Scout and his friends on the bus and brought back Leap, Lily and Tad in the 2014 video The Letter Machine Rescue Team, which also marks an art shift to CGI. Two other CGI DVDs have since been produced.

Tad sings a song about the sounds the letters make, backed up with living letters.

Tad sings a song about the sounds the letters make, backed up with living letters.