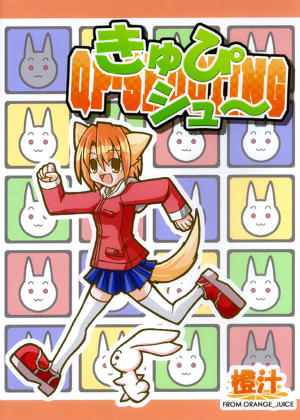 QP Shooting is a vertical doujin cute 'em up game produced by Orange_Juice, released for Windows PC during Comiket 66 on August 15, 2004. This was the first game developed by the circle and first entry of their "speed shoot 'em up" line of games.
Advertisement:

The story is set in a contemporary setting and its plot revolves the titular QP, a happy-go-lucky dog girl who was leisurely humming along as she tends to some errands at the local convenience store one day, hoping to find something delicious. At the store, stops something that caught her eye: some newly released pudding. QP was quickly heartbroken to find out that she didn't have any money at all to buy it, but after looking through her pockets, she finds a mysterious 500 Yen in her pocket. Without a second thought, she quickly purchased the pudding from the store and took it home, but when she arrived home and found out it was already dinner time, QP decided to save it for tomorrow. The next day, however, she wakes up to find her precious pudding missing, and in its place was a letter telling her that if she wants her pudding back, she must find the mysterious thief. Determined to get her pudding back, QP, along with her friend Rbit, sets out to find the culprit and rescue her sweet dessert.

Like many vertical shooters of its kind, players control QP as she shoots down various cutesy enemies that stand in her way on her quest to reclaim her pudding, and score points along the way. However, there are some features of this game features to stand out from other shooters in the genre. QP herself can use and acquire various "formations" that Rbit can take form for various situations, such as a frontal spread shot, a linear focus shot, a rear two-way shot, an orbiting shot, a "sword" formation, and many others, which can be purchased from the Usa Room by spending Usa Points earned from each session. It also features a chain-based scoring system where gathering point items without letting the chain meter deplete will steadily build your score bonus as more of these items are collected. After filling the Hyper Meter by collecting point items from defeated enemies and canceling their bullets, QP can go into a Hyper Mode which boosts her attack power and increases score bonuses, however, it can end prematurely if she takes damage while in Hyper Mode, but it will also save her from losing a life. The game features a Story Mode where stages can be played one-by-one with dialogue between stages and bosses, and an Arcade Mode where all stages are played in succession.

During the Christmas season of the same year, Orange_Juice released a short but free (and brutally hard) expansion pack called Xmas Shooting, which centers around Aru, a bunny girl serving as an apprentice to Santa Claus, who, on the night of Christmas Eve, has discovered that all the presents were mysterious stolen. Santa however caught a glimpse of the culprit, which he believes is someone with bunny ears similar to Aru, in which Aru takes her partner reindeer partner Rein with her to track down the thief get back the stolen presents on time for Christmas. Unfortunately, neither QP and Xmas Shooting have seen an English release, official or otherwise. A translated plot summary of the former for the curious however can be found here

. Many characters from QP Shooting would go on to be featured in the crossover virtual board game, 100% Orange Juice!, and the RPG game, 200% Mixed Juice, along with characters from Orange_Juice's later titles such as SUGURI, sora, and Flying Red Barrel. QP also made an appearance in Acceleration of SUGURI X-Edition as the final boss of one of its story scenarios and as an unlockable character. There was also QP Kiss, a freeware boy's love dating sim parody game by Orange_Juice that used to be available from their website during April Fools' Day until the downloads where removed, which featured gender-bent versions of characters from QP Shooting and SUGURI.

During the Summer of 2012, the game received a sequel with QP Shooting - DANGEROUS!!, released during Comiket 83. The plot of this installment revolves around the existence of pudding suddenly vanishing, and any memory of the existence of pudding being wiped from everyone in the world. Strangely, QP is the only one in the world who remembers pudding, thus she sets out to find the cause of this phenomenon and search for any remaining traces of pudding. QP Shooting - DANGEROUS!! retains many aspects of its predecessor, however, it features three unique playstyles for QP's Hyper Mode: Orthodox, Defensive, or Aggressive. Unlike its predecessor, QP Shooting - DANGEROUS!! was localized by Fruitbat Factory in 2016 through Steam and DRM-free directly from their website. Likewise, Xmas Shooting received a remake with X-Mas Shooting - SCRAMBLE!! released on August 23, 2015 during Comiket 88, and was also localized by Fruitbat Factory.