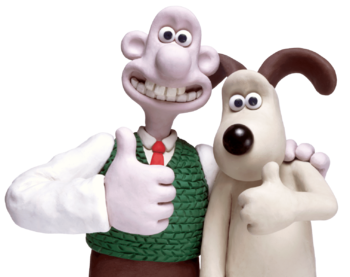 Wallace & Gromit are perhaps one of the most iconic animated duos of all time. This series of four short animated films and one full-length movie — all done using old-fashioned stop-motion animation — is about a kind-hearted but clueless Yorkshire-accented inventor, and his mute, long-suffering sapient dog who nonetheless has Undying Loyalty to his owner.

Created by Nick Park for Aardman Animations, the series has won fans and accolades on both sides of the Atlantic, including numerous Oscars, and is championed for its quirky humour, shout-outs to cinema, and for being a rare example of British suburban life visible in media exported to America.

Although the films are the heart of the franchise, it also includes video games, television series, comics, and books.

In 2003, Frontier Developments released a video game known as Wallace And Gromit In Project Zoo, which saw the return of Feathers McGraw as the villain in an original storyline; it was So Okay, It's Average in most respects. In the spring/summer of 2009, Telltale Games released a series of four episodic Wallace & Gromit adventure games, collectively Wallace & Gromit's Grand Adventures, for the PC and Xbox Live Arcade. The games are notable for successfully replicating the look and feel of the shorts, to the point of having fingerprints and other clay modeling details visible on the characters.

In 2010, BBC One commissioned a television program, Wallace and Gromit's World of Inventions, an educational program about famous or revolutionary inventions, hosted by the two. It begin airing in November with the episode Nature Knows Best.

In 2022, it was confirmed that production has begun on a new Wallace & Gromit film, with Nick Park on board as director.

See also its spin-off series Shaun the Sheep and Timmy Time, the Spin-Off of the spin-off. Wrap your head around that one.

Wallace & Gromit works with their own pages include:

These animations also provide examples of: