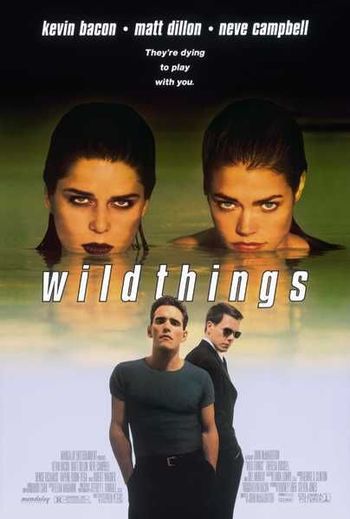 They're dying to play with you.

The film starts with Sam Lombardo (Dillon), a high school guidance counselor in Blue Bay, Florida, being accused of rape by Kelly Van Ryan (Richards), one of his students. Ray Duquette (Bacon) and his partner are assigned to the case. The charges appear to be unsubstantiated until Suzie Toller (Campbell) comes forward and says Lombardo raped her too. Lombardo hires low-rent lawyer Ken Bowden (Murray) to represent him and seems sunk until Suzie admits she and Kelly made up the charges to get revenge on Lombardo for past wrongs. Sam is awarded $8.5 million in a settlement with Kelly's mother and suddenly everyone wants a piece. The movie devolves into a scheme of epic proportions.

There were three Direct to Video sequels, which largely followed the same basic plot as the original, though the sex scenes were racier:

This movie contains an enormous amount of unexpected plot twists. Beware of spoilers!