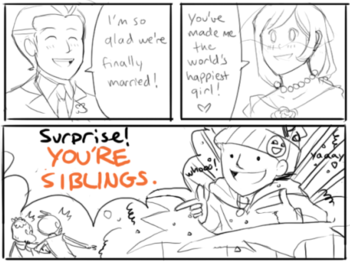 Why didn't he tell them that before they got married?
"How was I supposed to know that we were both related?
Believe me, if I knew she was my cousin we never woulda dated."
— "Weird Al" Yankovic, "A Complicated Song"
Advertisement:

The Game the Whole Family Can Play! Haha! Guess what you were doing?

Sometimes in stories, two people meet and just seem destined for romance. Love blossoms in a particular way, or perhaps the two have a loveless Arranged Marriage lying in wait for them instead. But then, someone makes a startling discovery — genetics has struck! The couple-to-be are related — and not in the "same species" sense — and the romance or arranged marriage is called off. The result may be either great rejoicing or great despair. If it's not called off despite the consanguinity issue, intentional Brother–Sister Incest results. Or if the two still want to be together and the author doesn't want to go the incest route, a counter-reveal may show up to prove that the genetics aren't a problem after all.

These days, many people are squicked out by this, so the characters often find out before they tie the knot/do the nasty. This wasn't always the case; Oedipus was very happily (but unknowingly) married to his own mother for many years and had two daughters with her before things fell apart (to the extent that The Reveal resulted in Oedipus' mother killing herself and Oedipus himself stabbing his own eyes out), so this is Older Than Feudalism. Still, this trope is surprisingly common in anime and manga, as well as other Japanese entertainment, due to much more relaxed views on the subject in Japan.

The surprise relationship is usually either brother/sister or half-siblings (sharing one parent rather than both). Parent/child is much rarer these days than it was in ancient Greece, and similarly for uncle/niece or aunt/nephew, thanks to some cultures' taboos on inter-generational relationships, even with no family relations involved.

First cousins, on the other hand, are only borderline squicky since marriage between cousins is actually legal in most places and is quite acceptable in many romance novels. In fact, in the Arabian Nights, a man will call a woman he loves or is married to "daughter of my uncle" because, at that time, marriage between cousins was considered the best option! Because of this, it almost never appears as a plot point since it's a little too close for some folks to be comfortable but not close enough that the plot demands the relationship break up. For relations more distant than first cousins (second cousins, removals and etc.), the squick diminishes with the distance. After all, thanks to how genetics and inheritance works within populations, if you're still having a problem with people who might be, say, 10th cousins or higher, the only relationship you're likely to be assuaged by is one where the couple come from radically different population groups.note To give a more concrete example: the British panel game QI once made an announcement that they knew for a fact that one of the panelists that evening was a descendent of the legendary 8th century ruler Charlemagne. Who was it? One of the panelists guessed it immediately - all of them. As well as the host, and the audience, and anyone watching at home, assuming they were from Europe at any point in their family tree. And it wasn't that Charlemagne Really Got Around, it was just that with so many generations since his time, everyone, by dint of pure mathematics (again, if you are of a European background) had to have at least some relationship with him.

The relationship is more like to be on the paternal side, because of Mama's Baby, Papa's Maybe. Historically was a fairly common way of making the Veronica of a Betty and Veronica off-limits. This often results in Half-Sibling Angst.

If the characters don't know the truth in advance but the audience does, this overlaps with Dramatic Irony. There's also potential for overlap with Incest-ant Admirer if the admirer isn't aware of the familial relation but the object of their affection is, or if the reveal of said relation bothers one party but not the other.