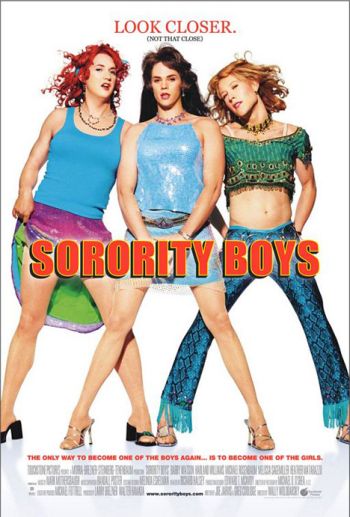 Sorority Boys is a 2002 comedy film directed by Wallace Wolodarsky, about three college guys who, after getting framed for theft and booted from their frat house, decide to dress up as women and pledge the "ugly girl" sorority, where they figure they'll blend right in till they can prove their innocence. Hilarity Ensues.

Dave (Barry Watson), Doofer (Harland Williams), and Adam (Michael Rosenbaum) are falsely accused of stealing money from their fraternity, Kappa Omicron Kappa (KOK). The money goes towards the end of the year 'KOK-tail Cruise'—the one that guarantees them a spot at a very high paying company no matter how low their GPA is. After being thrown out, they try to sneak into a party at the house by dressing as girls to get back a tape that should have recorded whoever did steal the money. Not being attractive, they are quickly nabbed by the "D.O.G. catcher" net.

Thrown onto the D.O.G.s' (Delta Omicron Gamma) doorstep, they are immediately accepted by the group for being 'plus-sized' girls. Since there is free room and board to those who pledge for the first semester at DOG, they decide to pledge to hide out for some time. While the boys deal with the hardships of being women, they are subjected to all kinds of abuse from the "pretty" sorority, the 'Tri-Pis' (Pi Pi Pi), and their brothers at KOK. All this while simultaneously trying to sneak back into the KOK house to get the proof they need to prove their innocence, and get reinstalled in their fraternity.

Slowly, the men relinquish their frat mentality and realize how hurtful they have been to women over the years. As they get to know the women of DOG, they begin to see them as people, and a romance blossoms between "Daisy" (Dave) and Leah, president of DOG.

The Film Contains Examples of: