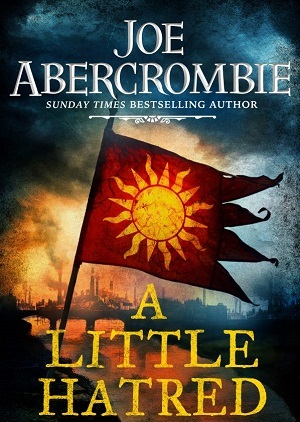 A Little Hatred is the first novel in the The Age Of Madness trilogy by British writer Joe Abercrombie, in which he returns to the world he created in The First Law trilogy.

15 years after the end of Red Country, the Union has entered an Industrial Age, with chimneys rising all over Adua, but that doesn't mean that the old powers have gone away, or that things have gotten any better.

Up in the North, a new generation of warriors led by Stour Nightfall seeks once again to expel the Union, not only from the North, but from Angland as well. In their way stands Leo dan Brock and his formidable mother, but their efforts are hampered by the lack of support from the crown. And among this carnage, the Dogman's daughter, Rikke, struggles to understand and control the Long Eye, which gives her glimpses of the future, with her only help coming from the mad hillwoman Isern-i-Phail.

Meanwhile, in Adua, Savine dan Glokta ruthlessly carves her way through the ranks of the Union's new barons of industry, with all the cunning and wit she learned at her father's side. All this even as the slums seethe with discontent that could blow the new world wide open.

As the age of science tries to supplant the age of magic, from the shadows, the First of the Magi continues his ancient war and will not relinquish his control of the world.

, Where the Fight's Hottest

For tropes, see The Age Of Madness