In the Future, Humans Will Be One Race 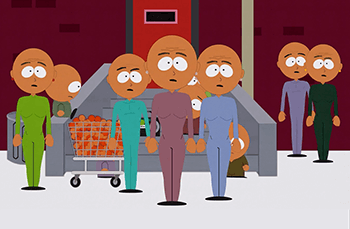 "A bit of white here, a bit of black there, there a touch of red, there a whisper of white, until out comes something which is neither black, nor white, nor red, nor yellow, but an indisputable masterpiece."
— Slave breeder, Goodbye Uncle Tom
Advertisement:

A science-fiction trope, most common in Literature wherein it's discussed that different races have essentially vanished, and everyone is pretty much within a limited range of color, usually a medium tan so to speak. Contrast with Humans Are White, which is basically the opposite idea, as well as the related Future Society, Present Values.

Essentially, as racism fades and travel becomes easier and easier, more and more multiracial children are born until the entire world's population shares one big gene pool. It's also common for people to have a Multiethnic Name as well.

Tends to imply something of a Utopia—given how much blood has been shed over race, a world where there has been much interracial coupling is likely to have solved at least that problem. Additionally, humans in this scenario tend to have formed The Federation or there is a lot of globalization (but framed in a positive way), as this type of future naturally implies a lot of interaction between different peoples.

One particular version that's popular in anime won't have all races merge, but rather a prominent number of half-European, half-Asian people. This may relate to Japan Takes Over the World. This particular version is also popular with cyberpunk, especially the part-Japanese version.

Needless to say, this entire trope is the worst fear of ethnic supremacists/nationalists. In another way, though, it's also their dream come true: only one race. When this doesn't happen in the future, often writers will address it via explaining that cultures or nations have settled their own planets, thus allowing them to maintain common day ethnicity in the far-flung future.

Bonus points if Everyone Is Bi and/or an Ambiguous Gender as well.

In actuality, this trope is unlikely to come to pass in the way we think of race; while closely-knit populations will often share traits for both genetic and cultural reasons, the color of one's skin is affected by multiple genes (and environment), allowing for a range of shades and complexions. See the Pashtun or Brazilians for the actual result, which is wildly varied looks often within the same family. The possibility of the trope is unlikely, and without selection an impossible assumption, since there are already far too many people for the population to reliably interbreed quickly and evenly enough to homogenize the existing races before new races begin to pop up without a concerted effort on the part of the entire human species.

Another unfortunate problem with the Utopian ideal this implies is that race does not always mean 'skin colour' or 'face shape' - for instance, in South Africa, people who would be considered 'just black' in Western cultures, can be/have been split into the 'Black' and 'Brown' races, even though there is no physical way of differentiating between these two populations. The historical definition of "race" in some cases also meant more like what now is termed "ethnicity". For instance, the English "race" etc. that would look not very different from its neighbors. Language and culture however can be equally divisive.

A subtrope of All Genes Are Codominant. Often overlaps with Ambiguously Brown.