Literature / The Ear, the Eye and the Arm 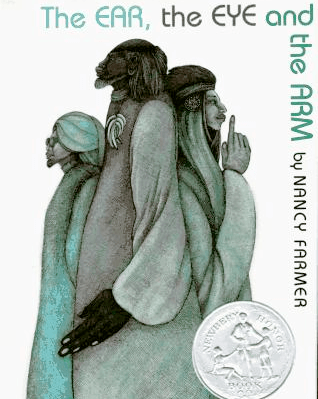 A 1995 Newbery Honor Book, The Ear, the Eye and the Armnote  (No, there is not a comma missing there) is a novel by Nancy Farmer set in Zimbabwe 200 years in the future.

Tendai and his siblings Rita and Kuda have lived a sheltered life and have a strained relationship with their father, the renowned General Matsika. Thus, with the aid of their caretaker, the Mellower, they sneak out of the house...and into a whole lot of trouble, getting themselves kidnapped. Meanwhile, the Matsika parents are frantic with worry, so the Mellower suggests hiring some detectives he has heard of - the Ear, the Eye, and the Arm. As the Matsika children struggle to survive, the detectives race to find them before it's too late.

Most notable for its heavy exploration of African myths and traditions, something that normally never appears in Western fiction.