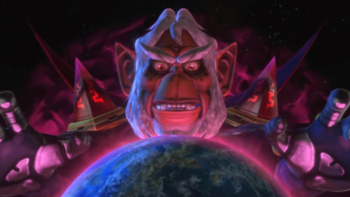 Apes and monkeys with human-level intelligence, whether artificial or natural, have a recurring tendency to be antagonists in fiction. If the protagonists are humans, they might be suffering an inherent sibling rivalry with the human race, and want to either wipe it out or subdue it. If it's a story with a cast of animals, they might see themselves as "superior" to the other species and try to rule over them. Either way, these monkeys are used as signs that something bad is about to go down.

This trope is distinct from Killer Space Monkey in that these monkeys are usually Super Intelligent Mad Scientists who want to Take Over the World or at least make life difficult for humanity. Another possibility is that they are Genius Bruisers determined to both overpower and Out Gambit their fellow primates. However, often they are just highly aggressive animals that attack humans (which may be Truth in Television for some primate species).

This here is the opposite of Silly Simian. Compare Mischief-Making Monkey, where the trouble the monkey causes is more harmless. Killer Gorilla is a subtrope, as gorillas (and other great apes) are particularly often portrayed as malevolent, due to their great strength and menacing appearance. For the underwater equivalent, see Devious Dolphins. For primates in general being depicted as intelligent, regardless of whether or not they're dangerous, see Intelligent Primate.