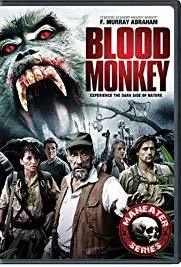 Experience the dark side of nature.
Advertisement:

Conrad Hamilton is an anthropologist seeking to study the missing link between man and ape. He uncovers a species of ape in Thailand, only to discover that they're incredibly vicious. They manage to slaughter his entire crew aside from himself and one assistant, but he does not give up. Deceiving a crew of college students into joining his expedition, Hamilton manipulates them into being ape chow so he can track the apes down and achieve scientific glory.

The film was the first to be released under the Maneater Series label, though none of the others are related to it. It was originally intended to be a Syfy Channel Original Movie, but due to an earlier deal the production company made it debuted on VOD first.