Pinball / The Wizard of Oz 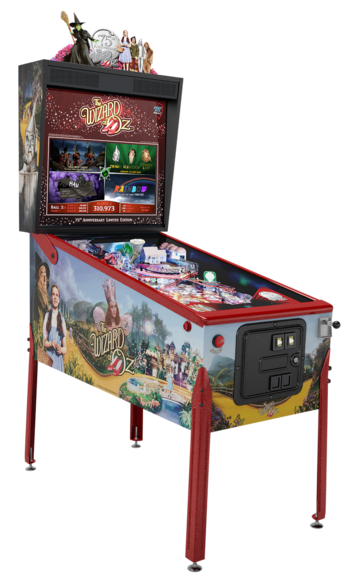 The Wizard of Oz is a 2013 widebody pinball machine, most notable for being the debut game from pinball manufacturer Jersey Jack Pinball. It was designed by Joe Balcer, with artwork by Jerry Vanderstelt, Greg Freres, and Matt Riesterer, and programming by Keith Johnson.

The game itself is based on the famous 1939 MGM film adaptation of L. Frank Baum's The Wonderful Wizard of Oz. Start with the Twister spinning the farmhouse to Oz, then use the Ruby Slippers to follow the Yellow Brick Road in a battle of good versus evil. Recruit the Scarecrow, the Tin Man, and the Lion, then battle the Trumper Bumpers in the Haunted Forest, bash open the Castle Doors, and rescue Dorothy from the Wicked Witch's Castle. Ride the Wizard's balloon, visit Munchkinland and the Wizard's Throne Room, and help Toto Escape, but beware the Winged Monkeys who are ready to pluck you for an unexpected ride. As you light up the Rainbow and restore color to Oz, the HD screen provides game status, instructions, and various movie clips and computer-generated effects.

As Jersey Jack Pinball's first game, The Wizard of Oz had some very high expectations, which most players believe it fulfills admirably. The game mixes nostalgia with modern gaming conventions, with a broad and detailed ruleset to keep players engaged. The moderate pace makes it approachable for newcomers, with the large display giving clear instructions and keeping bystanders entertained. The playfield toys are detailed and well-crafted, with the color-changing LED lighting and seven-speaker digital sound complimenting the package. If there's a complaint, it tends to be that the crowded playfield doesn't provide enough room for really fast and frantic action.

The game is available as a standard model and two Limited Editions, in "Emerald City" green and "75th Anniversary" red. A table is set up at the Smithsonian's National Museum of American History as part of its Wizard of Oz collection. There is also a kit to turn it into a ticket redemption game — players play for one minute with a simplified set of rules, and the game can be returned to its regular mode via a software switch.

The Wizard of Oz pinball demonstrate the following tropes: