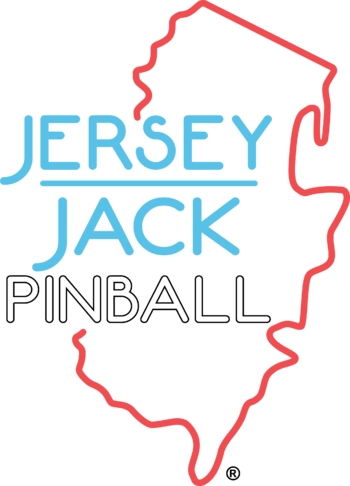 Jack of all trades, master of fun!
Advertisement:

is an American manufacturing company, founded in Lakewood, New Jersey and (as of early 2020) located in Elk Grove Village, Illinois. It is most notable for being the first new American manufacturer of Pinball machines in several decades, and only the second company in the industry since its collapse at the end of the 20th century.

At the turn of the century, Jack Guarnieri was the President of Pinball Sales, a New Jersey-based firm which sells thousands of pinball machines around the world. However, Stern Pinball — at the time the only pinball manufacturer remaining — was moving towards games with sparser playfields and simpler rules. This was a problem for Jack, since his customers preferred more expensive games with deeper rules and more mechanical toys; consequently, he decided the only solution was to start his own pinball company and make the types of games that his buyers wanted.

Jersey Jack Pinball officially debuted in January 2011, with a team of veteran pinball designers, artists, and creators. Their games have been characterized for their busy layouts, deep rules, and technological advancements, including 26" LCD displays, cameras, and color-changing LED lighting. The company's debut title was The Wizard of Oz in 2013.