All Your Colors Combined 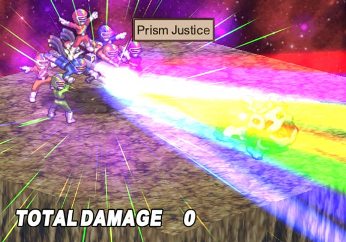 No one said it had to be effective.
"Let's bring them together!"
— Jason/Red Ranger, Mighty Morphin' Power Rangers
Advertisement:

This is about how a team with a color scheme have special combined attacks that "fuse" all their colored energy blasts into a rainbow attack. See Astonishingly Appropriate Appearance. Frequently uses other tropes like Calling Your Attacks, Combined Energy Attack, Set Bonus and "weaponized" versions of The Power of Friendship and Love. Quite often a case of Super-Cute Superpowers.

Not to be confused with All Your Powers Combined, which is about a single person possessing the powers of an entire group. Nor is it Together We Are X, but it may overlap.

Alternative Title(s): All Your Colours Combined