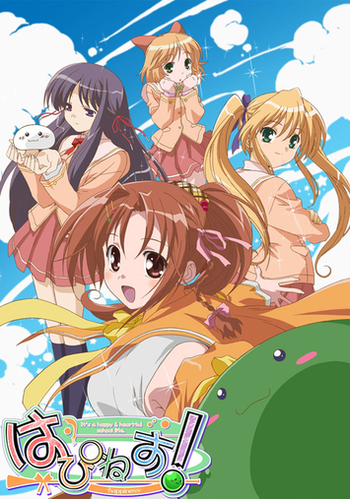 Originally a 2005 Visual Novel, Happiness! was adapted into an anime for the fall 2006 season.

When she was a young girl, Kamisaka Haruhi was saved from some bullies by a young boy who used magic to chase them away. Even though she never learned the boy's name, she was inspired to learn magic herself, so that she could help others just like she had been helped.

Flash forward to the present day, where Haruhi is now the top student in her grade at Mizuhosaka Academy, a school which teaches both magical and normal students, although the two groups use separate facilities and rarely interact. On Valentine's Day, Haruhi buys chocolate in hopes that she may encounter the boy who helped her out many years ago, but fails to find him, and thus decides to just give the chocolate to Kohinata Yuuma, a random student from the normal section of the academy. That night, there is a gas explosion in the facilities used by the mages, and so the mage students are transferred into the normal section of the school while repairs are being completed. Haruhi and her friend, Anri, find themselves in a class with Yuuma.

Rounding out the cast are Jun, a trans girl, Hachisuke, who is Yuuma and Jun's friend, Sumomo, Yuuma's sister who Haruhi used to play with when the two of them were younger, Koyuki, the fortune-telling daughter of the school administrator, and mysterious transfer students Ibuki, Saya, and Shinya.

The visual novel would later get a fandisc titled Happiness! Re:Lucks in 2006. 2019 would then give it a sequel-of-sorts in Happiness! 2 Sakura Celebration, which would get its own fandisc, Happiness! 2 Re:Lucks, the year after.

Not to be confused with the Todd Solondz film and/or the manga of the same name. Or the emotion (see Happiness Tropes for that).