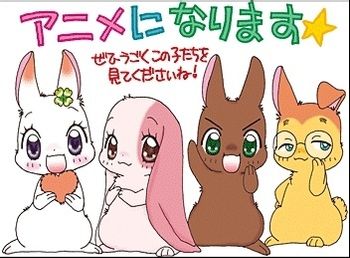 Welcome to Crescent Forest note  From left to right: Clover, Mallow, Kale, and Shallot. Not pictured: Hickory and Rambler
Advertisement:

Happy Happy Clover (はぴはぴクローバー Hapi Hapi Kurōbā) (2005-2008) is a Shoujo manga series by Sayuri Tatsuyama that focuses on a day to day life of a female rabbit named Clover and her friends Mallow, Kale, and Shallot. It takes place at a forest called "Crescent Forest" where the main story takes place along with other animals that live there. Clover's dream is to travel with Rambler The Rambling Rabbit, but he thinks she's too young to go traveling with him. Clover's main goal is to try to impress Rambler so she can go out traveling with him someday. The manga was serialized on Ciao Magazine the same magazine that Sayuri's previous manga series Pukupuku Natural Circular Notice was shown.

The manga later got an animated adaptation in 2007 of the same name by Group TAC. Which adapts the first three volumes. The anime was broadcasted on TV Aichi, Tokyo Mix, and Kids Station from July 6, 2007 - September 29, 2007 with a total of 13 episodes. In 2009, Viz Media translated all 5 of the volumes and was sold in the United States and Canada. During the manga run, it's gotten one Nintendo DS game that was released between 2007 and 2008

◊. This is also one of Sayuri Tatsuyama's more well-known works next to Pukupuku Natural Circular Notice which previously won the Shogakukan Manga Award for children's manga in 2002.