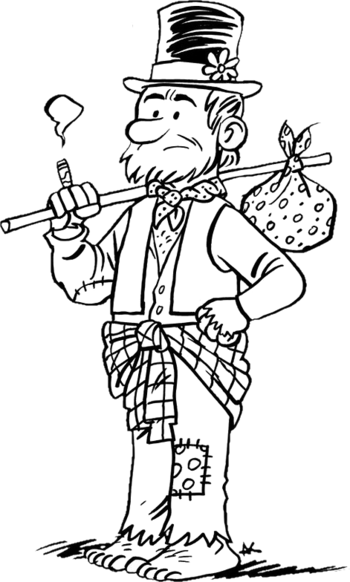 Sterotypical Hobo outfit. The Bindle is the bag behind the back, together with the stick they make Bindle Stick
The stereotypical way for runaways and Hobos alike to carry their belongings: wrap a bunch of objects in a bedsheet or large kerchief, tie it to a stick and sling it over your shoulder. The cloth of the bindle itself will usually be depicted as polka-dotted.
Advertisement:

In hobo slang during and after the Great Depression, someone who carried a Bindle Stick around was referred to as a "bindlestiff".

Compare the Shopping Cart of Homelessness, a modern urban counterpart to this trope.