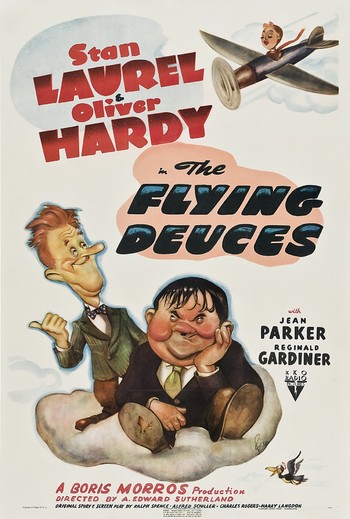 The Flying Deuces is a 1939 film directed by A. Edward Sutherland, starring Laurel and Hardy.

In this one Stan and Ollie are up to their usual goofball antics in Paris. Ollie has fallen head over heels in love with Georgette, the daughter of the innkeeper. What Ollie doesn't know is that Georgette is already married. When she rejects his proposal, a heartbroken Ollie resolves to drown himself in the Seine, and brow beats Stan into jumping with him.

They are about to jump in the river when Francois, a passing officer (and unbeknownst to Ollie, Georgette's husband) recommends that they join the French Foreign Legion instead. They do, and they're off to Morocco, but unsurprisingly Stan and Ollie decide to leave, not grasping the concept of "desertion". They're chased by, among others, Francois.

One of only two Stan and Ollie features to fall into the public domain; as such it is available from a wide number of sources but often in badly faded/decayed prints. Francois is played by Reginald Gardiner, who a year later would play a similar straight man role in The Great Dictator.