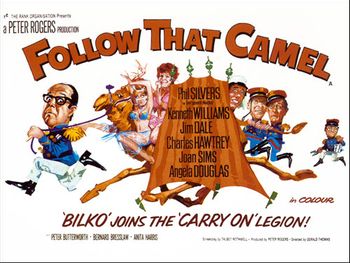 Abdul Abulbul: The infidels will perish when the crescent of the moon's in its third stage of Orion.
Sergeant Nocker: When's that?
Abdul Abulbul: Tuesday.
— One of the first meetings between the hero and the villain.
Advertisement:

Follow That Camel is a Carry On movie that was released in 1967 as the fourteenth movie in the series. It starring Special Guest Phil Silvers, Kenneth Williams, Jim Dale, Charles Hawtrey, Joan Sims, Angela Douglas, Peter Butterworth, and Bernard Bresslaw.

This was the second Carry On film that didn't have the "Carry On" phrase proceeding the verb/phrase, but is sometimes stuck on when listed as a feature in the TV Guide. It wasn't meant to be a member of the franchise to begin with anyway, despite the same crew and the Universal-Adaptor Cast, but was reluctantly stuck on there to boost the box office. (Interestingly, in some countries the movie was released as Carry On in the Legion).

It is said to be a parody of the novel Beau Geste by Percival Christopher Wren, mostly of the 1939 movie adaptation, but it mocks other works around the plot of the French Foreign Legion, such as Under Two Flags.

After finding out his innocence, Jane sets out to find him in North Africa, where with help from local café owner Zig-Zig (Sims), Bo and Simpson join the French Foreign Legion. The raging Commandant Maximilian Burger (Williams), and his second-in-command Captain le Pice (Hawtrey) are on high alert following a threat from Sheikh Abdul Abulbul (Bresslaw), and so treat the two newcomers with great suspicion. They are introduced to Sergeant Ernie Nocker (Silvers) who takes an instant dislike to them until he realises that they know his tales of bravery against the Riffs were all lies, and he had been having it off with Zig-Zig the entire time.

Bo and Simpson are soon treated like royalty by Sergeant Nocker, but when he takes the two out for the night, Abdul uses Corktip (Anita Harris), a sexy Belly Dancer, to capture Bo and Sergeant Nocker, while also meeting Jane upon her arrival and taking her to be his thirteenth wife.

Simpson manages to locate Bo and Sergeant Nocker, allowing the latter to escape to tell Commandant Burger what has happened, but the Commandant (having heard from Zig-Zig of his lies) refuses to believe him until he hears that his former flame Jane is also in trouble and leads the Legion to rescue the three. When Bo and Simpson are found abandoned and nearly dead in the desert, it soon becomes a race against time for the Legion to retrieve Jane from Abdul's clutches and to prevent an attack on the garrison as Hilarity Ensues.

Alternative Title(s): Carry On In The Legion, Carry On Follow That Camel