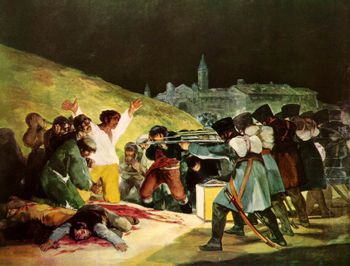 Death by firing squad has been a classic way of execution since firearms became widely used in war.

A classic scenario for a Just in Time rescue, a Last-Minute Reprieve, a "Facing the Bullets" One-Liner, or a combination thereof. The condemned is sometimes offered One Last Smoke. Expect a hero to refuse a blindfold. Contrast You Always Hear the Bullet. May involve a Public Execution.

Most of the examples are set in World War I or in the Banana Republic, but they can occur at other times too.

In order to qualify for this trope, there must be a firing squad.

As this is a death trope, beware of spoilers.

open/close all folders
Anime & Manga
Arts
Comic Books
Prisoner: (singing) "How I'd love to see someone else in my place!"
Advertisement:
Comic Strips
Fan Works
Films — Live-Action
Jokes
Literature
Live-Action TV
Music
Print Media
Tabletop Games
Theater
Video Games
Web Comics
Western Animation
Real Life
The firing squad was once a popular method of execution, but it has since fallen out of practice in most places for its cruelty (and the Squick factor). It's actually fairly humane as execution methods go, but only if done properly — as most humans are very reluctant to actually point at and shoot to kill other humans, they don't always do it right, and it can sometimes lead to a messy outcome