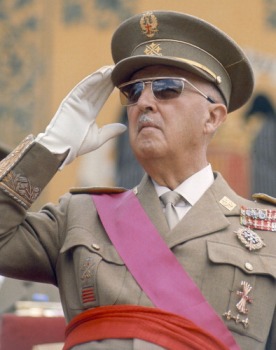 Generalissimo Francisco Franco Bahamonde (4 December 1892 – 20 November 1975) was dictator of Spain from 1939 until his death. He came to power during the Spanish Civil War, during which time he was supported by both Benito Mussolini and Adolf Hitler. He wisely chose to keep his distance from them, however, when the dress rehearsal ended and the big show began. Not to mention that, to the day he died, there were Republican Spanish strongholds that would resist him.

Originally third in command of the Spanish rebels, Franco rose to power after his superiors died in a pair of rather convenient plane crashes. It is worth noting that, while he enjoyed support from fascists both abroad and within Spain (most notably the "proto-fascist" Falangists), Franco did not fully subscribe to the ideology, choosing to shun its revolutionary aspects in favor of Catholic traditionalism, earning him support from the monarchist factions and the Catholic Church itself, further cementing his power.

After obtaining power, Franco brutally cracked down on political opponents to solidify his reign. The Blueshirts, his paramilitary secret police and equivalent to the Nazi Einsatzgruppen or SS, killed scores of people in Spain both on the streets and through means such as concentration camps. Unfortunately, any international scrutiny over these actions faded when Cold War began. This shift in international politics, combined with Franco's opposition to Spanish communists during the civil war and his neutrality in World War II, led to something of an Enemy Mine situation with the western world. NATO and the United States quietly supported his regime and looked to other way in regards to his crimes, and Franco in turn moderated some of his stances and policies over the years in order to maintain their support.

Franco was something of a film aficionado, and wrote the screenplay for Raza

, a film set during the Spanish Civil War.

He died relatively peacefully in 1975. In 2019 his body was moved from his gargantuan Valley of the Fallen mausoleum to a private family gravesite.

Probably not related to Dave or James.