Recap / Tintin - Tintin and the Picaros 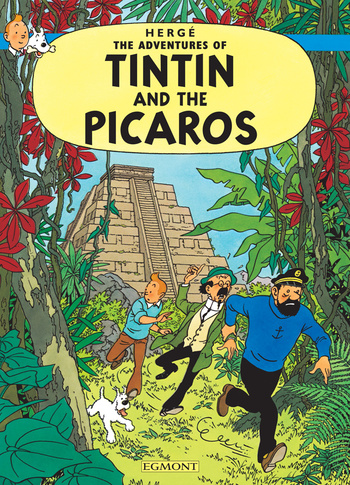 While on a tour to San Theodoros, Bianca Castafiore, her troupe and the Thom(p)sons are imprisoned by General Tapioca on the false charges of being involved in a conspiracy to overthrow him along with Tintin, Haddock and Calculus. Haddock and Calculus decide to travel to San Theodoros to clear their names, while Tintin initially refuses, correctly suspecting it to be a trap. Not wanting to leave his friends alone, Tintin does follow them after a few days.

In San Theodoros they discover that Castafiore's imprisonment was orchestrated by their old enemy Colonel Sponsz, who used his influence to help Tapioca rise to power, as an elaborate trap. They find that the only way to save their friends from imprisonment and execution is to help General Alcazar and his rebels, the titular Picaros, overthrow Tapioca once more.

This was the last Tintin story completed and published by Hergé before his death in 1983. The unfinished draft of what would've been the follow up was posthumously published in 1986.