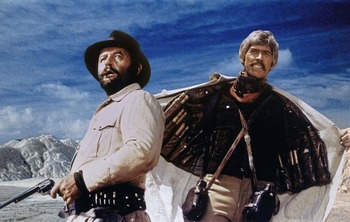 Guess which one's Irish?Hint He's the one on the right.
"Better come clean with ya now, sweetheart. That was an outright lie I was giving ya about me revolver being wet. You see, I'm not too fond of shooting. It's my preference to blow things up. Once you blast the roof off a pub, and see all the parts flying off people, a little bang-bang's never going to match the sight of that. And here I am with all these fine grenades, and such a sweet beauty of a remote."
—Brian, Sin City
Advertisement:

Ireland is famous for many things. The lush, green countryside. The friendliness of the people. Their red hair and mellifluous brogues (accents). The song, the music, the dance (céilí). People skilled with the use of explosives.

A Subtrope of Oireland, Demolitions Expert and Mad Bomber, the Irish Explosives Expert is a person hailing from the Emerald Isle whose use in the plot is that of the explosives expert. As the Oireland page says, a great many Irish characters in action movies tend to be this trope. This trope is derived from The Troubles, a dark period of time for both the North and South, where bombings were carried out by various paramilitary groups (most notably the Irish Republican Army) against targets both military and civilian. In a real life inversion of this trope, the Defence Forces has a bomb disposal unit that makes regular callouts to disarm or perform controlled detonation on suspect devices that are a result of this.

Often found as part of a Western Terrorists cell. This trope also tends to overlap with Your Terrorists Are Our Freedom Fighters.