Thrown Out the Airlock 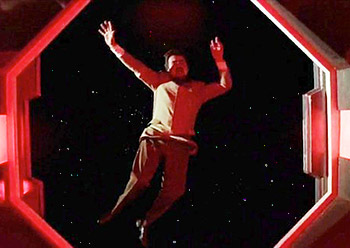 One giant leap for mankind.
"You know, I hear tell they used to keelhaul traitors back in the day. I don't have a keel to haul you on, so..."
— Captain Mal Reynolds, Firefly, "Ariel"
Advertisement:

Throwing someone out a spacecraft or orbital space station's airlock without a spacesuit, or as some universes call it, "spacing", or simply "airlocking", is a common method of killing someone in science fiction works involving space travel. This one is usually reserved as a last-ditch effort to get rid of a bad guy, though certain Captains (especially Space Pirates) have been known to use this as a method of execution. By all accounts, getting exposed to the hard vacuum of space is not a pleasant way to die, and the effects of this on the body are covered in much more detail on the Explosive Decompression page. A somewhat crueler version involves giving the executed a spacesuit with enough air to let them last a while so they can fully appreciate their upcoming death.

An odd bit of Hollywood Science regarding getting Thrown Out the Airlock is that it always causes the victim to be violently "sucked" out into space (actually blown, as it's the atmospheric gasses leaving under pressure that pushes objects out, like how air blows out of a punctured tire from the pressure inside rather than sucked out by the lower pressure outside the tire). In Real Life, a pressure difference of a single atmosphere would not cause very much explosive force and would happen almost instantly rather than cause the prolonged gale-force winds that seems to always happen in the movies. Granted, there would be a rather fast stream when the cover starts to open, but by the time it opens enough for someone to exit, the wind slows down (and the pressure drops). As airlocks are, in the vast majority of cases, intended for scenarios other than "jump out before the ship explodes", they will likely be designed to minimize air loss. This includes having air lock chambers as small as possible and some foolproof measures to ensure that both doors of the sluice will not open at once. Which means there's simply not enough air to have a long wind. Also, there's no reason to give any airlock a powerful instantly-opening door if it's not an evacuation exit or torpedo tube — it's more likely to have the air slowly pumped out (or, more likely, pumped back into the ship) before opening. We don't want those maintenance guys to drop crates every time they exit, right?

See The Coconut Effect and Reality Is Unrealistic. Appropriate, given that Space Is an Ocean, and parallels can be drawn with keelhauling or walking the plank. Note that the loss of oxygen from the ship's system will never be a problem no matter how much you do it. May result in Dramatic Space Drifting, and may be a form of Sinister Suffocation.

Upon hearing Avocato tell Gary that he killed Little Cato's real parents, Ash loses whatever respect she has for the Team Squad and fully commits herself to Invictus, announcing that she's going to take Little Cato away with her before throwing Gary and Avocato into space.

Example of:
Jumping Off the Slippery Slope

Upon hearing Avocato tell Gary that he killed Little Cato's real parents, Ash loses whatever respect she has for the Team Squad and fully commits herself to Invictus, announcing that she's going to take Little Cato away with her before throwing Gary and Avocato into space.