Torn Apart by the Mob 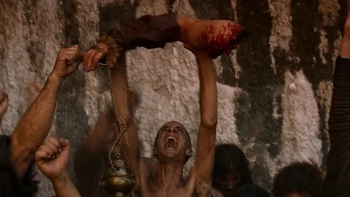 When a Torches and Pitchforks mob descends upon a helpless victim, they will often find themselves strung up from the nearest tree or lamppost. However, sometimes the mob is so incensed that they cannot even be bothered with the niceties of the rope, and instead extract and immediate and bloody vengeance with their hands: ripping the unfortunate soul to pieces with their bare hands.

This trope is Older Than Feudalism, going back at least as far of the legend of Orpheus in Classical Mythology, with some modern uses of this trope being a specific reference to Orpheus.

Only applies to sapient mobs (or mobs that would be sapient if they weren't gripped by mob mentality). Zombies, etc. need not apply.

One potential outcome for the Powder Keg Crowd.

Compare Devoured by the Horde. Also compare Do with Him as You Will.

As this is a death trope, it will have unmarked spoilers.