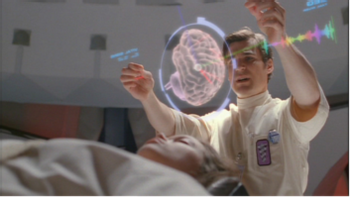 In a desperate attempt to get a brainscan for River so that he can see what was done to her at the Academy, Simon persuades the crew to help smuggle him and River into a highly guarded hospital on the planet of Ariel, promising to make it worth their while by identifying valuable drugs for them to steal. Jayne, who at the start of the episode got his chest slashed by River in a quite infamous Ax-Crazy moment, is assigned to protect Simon and River during their infiltration while Mal and Zoe disguise themselves as EMTs and make off with the goods. The infiltration involves Simon and River having to fake their deaths in order to get in, since they are still very much wanted fugitives.

While Simon and River are unconscious, Jayne, who has had issues with Simon and River pretty much from the moment they first came on board Serenity even before he got slashed up by River, makes contact with the Feds in order to turn them in for the reward money. When Jayne returns, River rises like a zombie and says "Copper for a kiss?" which thoroughly spooks out Jayne. Simon awakens coughing and spluttering thanks to the side-effects of the drugs, while River vomits offscreen in her own reaction.

During the infiltration, Simon has his finest moment when River alerts him to a patient who is being treated incompetently and is about to die, and Simon, who is posing as a doctor that is not on the Most Wanted List, steps in and takes over the operation, saving the man's life and then chewing out the doctor responsible for the incompetent treatment. When the three of them find the room with the holo-imager, both Simon and Jayne learn a bit of what was done to River at the Academy, including having her amygdala stripped bare to remove her ability to block out anything she feels. Simon is horrified at this revelation, and Jayne shows a few signs that maybe turning them in wasn't such a great idea.note Or he begins carrying out his original plan at the agreed-upon time. Jayne leads the two away toward a rear entrance, citing a change of plans, and as Jayne and Simon start arguing, River screams and starts babbling. Then the Feds show up.

Along with Simon and River, Agent McGinnis, the Fed in charge of the case, also arrests Jayne for aiding and abetting the two fugitives, intending to keep the reward money for himself instead of giving it to Jayne as he promised. As Jayne learns that McGinnis has betrayed him in turn, he tries to fight his way out but is subdued when the Feds use stun rifles on him. At the holding facility, Simon shows an incredible amount of balls when he demands to know what will happen to him and River, and tells the Feds he is not moving until McGinnis answers his very simple question, or shoots him. McGinnis takes the three of them to a holding cell. Meanwhile, Mal and the others twig to the fact that the Feds have arrived when Kaylee and Wash intercept coded communications, and Mal and Zoe set out to rescue the other three members of the crew.

Jayne, who is mad as hell about McGinnis's betrayal and feeling a bit of remorse for having betrayed Simon and River, decides to get the two out of there, snapping one guard's neck while still handcuffed and giving Simon the opening to take out the second Fed in the room. But things get even worse when the Blue Hands of the Academy come calling for River. The Feds who Simon talked to, including McGinnis, die a horrific death for having come in contact with River at the hands of a device that makes them all bleed from the eyes and other orifices before dying. As River feels the Blue Hands approach, she starts running, and Simon and Jayne follow. The Blue Hands track the three, killing the Fed that Simon choked out with the same eerie device that killed the other Feds. Jayne quickly hustles Simon and River to a back exit, but can't get the door open with the stolen Fed stun rifle. The three are saved from the Blue Hands when Mal blows open the exit door with a shotgun.

The crew make their escape from Ariel, but things are not done, as Mal quickly twigs to the fact that Jayne was the reason the Feds were even at the hospital and knocks Jayne out with a wrench. Jayne wakes up in the cargo bay airlock of Serenity as the ship is taking off, and a confrontation between him and Mal ensues, in which Mal is in full-on Papa Wolf mode and vehemently asserts that "you turn on any of my crew, you turn on me!" The only thing that saves Jayne from being Thrown Out the Airlock is when he urges Mal to "make something up" and not tell the rest of the crew what he did. Mal lets Jayne off with a deadly warning: "The next time you decide to stab me in the back, have the guts to do it to my face."

"Ariel". Simon, River, and Jayne infiltrate a hospital in the core worlds to do diagnostics on River. River realizes that a patient nearby is about to suffer major complications from his cardiac surgery, and Simon goes to help. After saving the patient with a debrillator, he rips the man's doctor a new asshole for nearly killing his patient by prescribing the wrong drug and causing a reaction with another drug the man was taking.

"Ariel". Simon, River, and Jayne infiltrate a hospital in the core worlds to do diagnostics on River. River realizes that a patient nearby is about to suffer major complications from his cardiac surgery, and Simon goes to help. After saving the patient with a debrillator, he rips the man's doctor a new asshole for nearly killing his patient by prescribing the wrong drug and causing a reaction with another drug the man was taking.