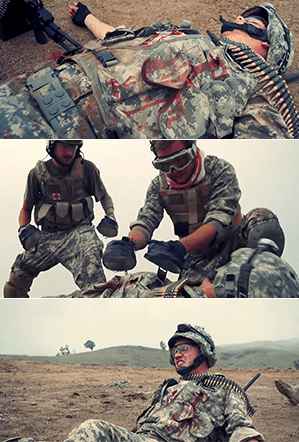 Ah, 1,000 volts of electricity straight to the heart: the perfect cure for a bullet wound.
Hank: In case I'm incapacitated for any reason, do you know how to start a man's heart with a downed power line?
Bobby: No.
Hank: Well, there's really no wrong way to do it.
— King of the Hill
Advertisement:

A defibrillator is a remarkable device that can help revive a patient who is in cardiac arrhythmia threatening to turn into a cardiac arrest by administering an electric shock and inducing the conditions needed to begin CPR. This alone makes it a valuable and potentially life-saving tool. On TV, however, the defibrillators must be magical, because they work quite differently and have a much higher success rate than they do in real life.

A Magical Defibrillator works in a distinctive way. The rescuer encounters someone who has suffered a Hollywood Heart Attack. For scenes playing out in a hospital, we will hear a Flatline sound ringing out. The rescuer grabs the paddles and rubs them together dramatically. Then he removes the victim's shirt, shouts "Clear!", and presses down on the patient's chest while the device makes a satisfying "CHUNK". The patient will jerk violently, and you may even see visible sparks. This will revive the patient on its own; if not, he will perform CPR, which will be clean, pretty, and reliable. For Rule of Drama purposes, though, they don't always work the first time; characters will need two or three dramatic tries before it works.

This trope implies that defibrillators work by administering an electric shock to the patient which gets the heart back to doing what it needs to do. Unfortunately, this is not the case; in Real Life, a defibrillator stops a dysfunctional heart rhythm, and CPR is needed to get the heart doing what it's supposed to do if it doesn't restart on its own. Therefore, shocking an asystolic (flatline) patient will do absolutely nothing of value, which is why a flatlined patient will first be given a round of drugs such as Epinephrine (not with a Shot to the Heart) to jumpstart the heart into any kind of activity, which can then be shocked.

The quasi-logical extension to this protocol is that any electric shock can do what a defibrillator can; as such, a Magical Defibrillator could also be the use of lightning-based powers to revive people (which may be justified depending on how those powers are explained to work). Alternatively, TV victims might be hooked up to what's known as a "suicide cord" — a wall plug with nothing but two bare wires, which is incidentally a good way to induce the need for a defibrillator in real life. Additionally, the lightning-based power of a TV defibrillator provides characters a chance to use them offensively.

Defibrillators commonly appear in Medical Dramas; whether or not they're magical depends on the series. Unrealistic medical dramas have a tendency to use them on a flatlining patient, which is not how they're used in Real Life; again, a defibrillator creates a flatline so that you can use CPR to get the heart doing what you need it to do.

This is a sub-trope of Worst Aid and a sister trope to CPR: Clean, Pretty, Reliable, another medical technique that works very differently on TV than it does in Real Life. It's often used in video games, where it's an Acceptable Break from Reality.

For more information about defibrillators in Real Life, see the Useful Notes page. (That page is not meant to be a guide for how to revive someone in real life; if someone near you actually needs a defibrillator, call emergency services and/or find an AED and follow its instructions.)

A Flatline Plotline often involves one of these used to temporarily "kill" and then revive a patient for whatever reason.

Finally, as this trope can involve dying characters, please beware of spoilers.

When a defibrillator is used as a weapon instead of a healing tool, see Shock and Awe.