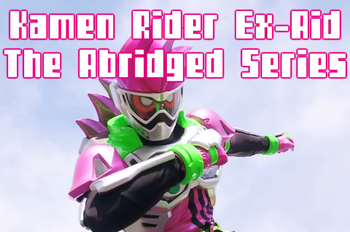 "I’m the only winner here."

. It follows the basic plot of Ex-Aid, but certain aspects are emphasized to be more parodic. Other artistic liberties are taken with the characterization, such as Emu being a jerk and Poppy being a weeaboo.

Aside from Ex-Aid Abridged, there also exists a Kamen Rider Ghost: The Dead Abridged Series created by the same people, with a shorter and even more compressed retelling of Ghost and taking place in the same universe. Takeru Tenkūji and other characters from this series occasionally appear in Ex-Aid Abridged-related material.

The series can be watched here

On September 6, 2019, a compilation video of all the episodes was released, including the finale episodenote which was not in its own separate video, bringing the abridged series to a close.